Reviving Japan by restoring its homes, for The Journal 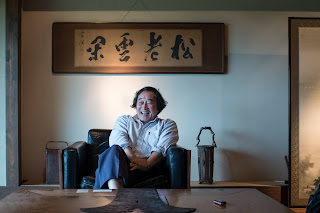 Minka: a tale of friendship and renewal
[photos courtesy of Craig Mod and Yoshihiro Takishita]

To residents of the seaside tourist town of Kamakura, Kanagawa Prefecture, it’s known as “the house on the hill”—an 18th century Japanese minka farmhouse perched atop Genjiyama, one of the town’s highest elevations.

Rumored through the years to be the villa of a former prime minister, the sanctuary of an ocean-worshipping religious cult, even the refuge of a disgraced foreign leader, it is in fact a nearly 300-year-old wooden edifice moved there in the 1960s from the rural Japanese prefecture of Gifu.

The farmhouse was painstakingly rebuilt, restored, and modernized by two men: the late American Associated Press journalist John Roderick and his adopted Japanese son, Yoshihiro Takishita. Today, it’s one of the most beautiful monuments to traditional Japan that is more than just a relic. 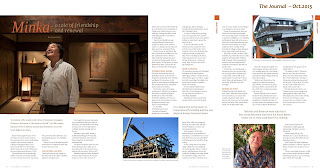 “John and I used to rent a place on the other side of the valley,” Takishita explains, waving his arm.

On a bright hot summer afternoon, we are standing in the front room of his house, cool and shaded, surveying its panoramic views of Kamakura’s scalloped rooftops sloping down to the sea.

Takishita is spry, quick-witted, a mellifluously bilingual 70-year-old with thick black hair and a baritone bellow laugh. He is also bluntly unsentimental.

“We always wanted to have our own house. But back then, [John] was a journalist with no money, and I was a student with no money. What to do?”

Takishita’s adoptive father, Roderick, may have been broke, but he was not unknown. Born in the US state of Maine and a veteran of World War II, he covered the rise of communism in China in the 1940s, living in a cave with Mao Zedong and fellow rebels while filing reports to AP editors in Washington. 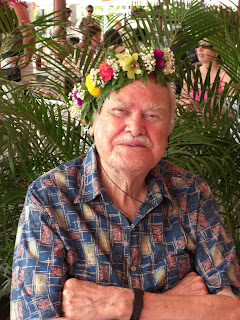 Stints in the Middle East and London followed, before he was assigned to Tokyo in the 1950s, to report on a rising American ally and keep an eye on communist China.

Roderick won an award from the AP for journalistic excellence; he was also credited by Chinese Premier Zhou Enlai for “opening the door” to China for foreign media. But his book, Minka: My Farmhouse in Japan, published in 2007, a year before he died, may be the pillar of his legacy.

The book chronicles the story of Kamakura’s house on the hill and Roderick’s relationship with Takishita and Japan. It’s a testament to the power of transcultural friendship, and the way physical houses, beautifully made, can become homes.

But it’s also a story about Japan and America. Takishita was inspired to look for a traditional Japanese farmhouse by Texan Meredith Weatherby, publisher of books on Japanese art, and translator of works by Japanese literary icons such as Yukio Mishima.

In the 1950s, Weatherby had erected a traditional Japanese farmhouse in the middle of Roppongi, Tokyo’s foreigner-friendly entertainment district, and it blew Takishita’s mind. 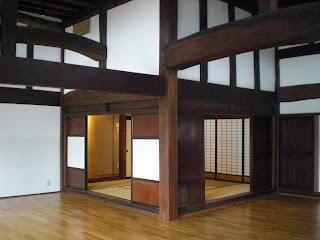 “I came to Tokyo and it was huge, and so many people, and I find this American and his house and I couldn’t believe my eyes when I opened the door,” he says.

“It was an old minka, an old farmhouse, but I opened the door and there was a flush toilet. Wow! Fantastic. Then I went to the kitchen.

“American people are quite open; they show everything in the house. What impressed me the most was the big white icebox—American-made, huge. I’d never seen such a big ‘refrigerator’. ”

The experience transformed Takishita’s evaluation of his rural Japanese upbringing. All those old hovels from which he’d escaped to Tokyo might be worth something; they might even be the future he and his adoptive father were seeking.

“I just wanted to build a house like Weatherby’s in Roppongi. I told John: We’re wasting our money on rent, when we could live in something beautiful.”

Takishita alerted his snowbound family in Gifu to be on the lookout. Japan in the 1960s was rising and thriving. The 1964 Tokyo Olympic Games brought new money and increasing optimism. 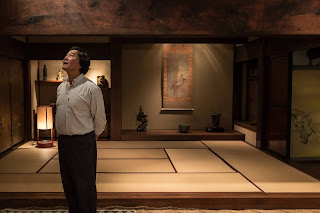 In the summer of 1965, his mother phoned to say she’d found something—an old farmhouse in Issei, Gifu Prefecture that was cobwebbed and falling apart, but would be cheap to buy.

“It was a long drive to reach this village called Issei,” says Takishita. “It was like going to Tibet. It took us forever: winding roads, narrow up and down, climbing near cliffs.

“Finally we reached the village, and to our surprise, it was like a medieval town—only 11 houses. People were looking at us as though we were from Mars.”

Owing to seasonal rains and the release of a dam, Issei was about to be flooded. Townspeople were evacuating; houses would be left to sink into mudslides or rot.

Takishita and Roderick were told by the mayor that if they could dismantle and move the house before winter set in, they could have it for nothing. If they deserted the village without taking the house, they would insult the town.

They had a month—October 1965—Takishita says, before the snows would make the task impossible. With the help of friends, they dismantled the home in Gifu and transported the materials to Kamakura.

But that was just the start. 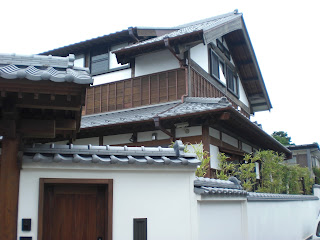 “At that time, on this big peak in Kamakura, there was no electricity, no [running] water,” Takishita says.

“I said, ‘John: what should we do about living? We need water.’ ‘Never mind,’ John said, pointing up. ‘We’ll catch rain. With this view, we’ll be happy.’”

Takishita and his wife, Reiko, now have what is likely the most eloquent view of Kamakura, in a house that combines Japanese single-beam artistry with mod cons such as heated Jacuzzi-like baths, Toto washlet bidet toilets, Wi-Fi and leather sofas.

From the outside, the peaked roof and triangular symmetry tell stories of a farming Japan that is fast dying; from the inside, the elegant carpentry and bamboo-lined ceilings speak of a Japan that endures.

Takishita and Roderick are the subjects of a viral short documentary film.  Minka: A Farmhouse in Japan, by Davina Pardo, was posted to The New York Times’ website last spring. Pardo’s initial plan was to record Roderick’s story, but the latter died in Hawaii in 2008 before the film was completed. So Takishita became its primary subject, his subsequent work as a restorer of Japan’s farmhouses and the glories of its past the not so subtle subtext.

“I’m happy we did it,” Takishita tells me now. “Because when my father was in his death bed, I asked him, ‘What shall we do with these filmmakers asking these questions?’, and he said, ‘Talk to them.’ His voice was too weak at that time. It’s a shame. He loved to talk.” 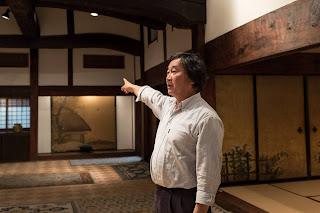 As the country hollows out, its population rapidly aging and diminishing, Takishita is an icon of renewal. “Some people still say, ‘Oh, Takishita-san is crazy,’” he tells me as he walks me down the hillside toward Kamakura station.

"And I admit: My kind of Japanese minka farmhouse is a shrine. I guess it’s Shinto, whatever that means to you or to me. All I know is that there is some kind of mystery of the space of these houses that gives a kind of healing power. It’s very comforting." 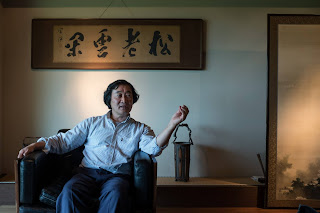 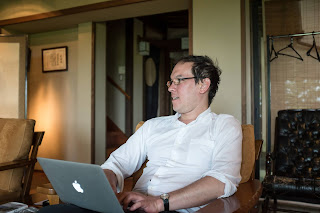 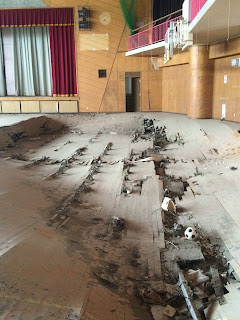